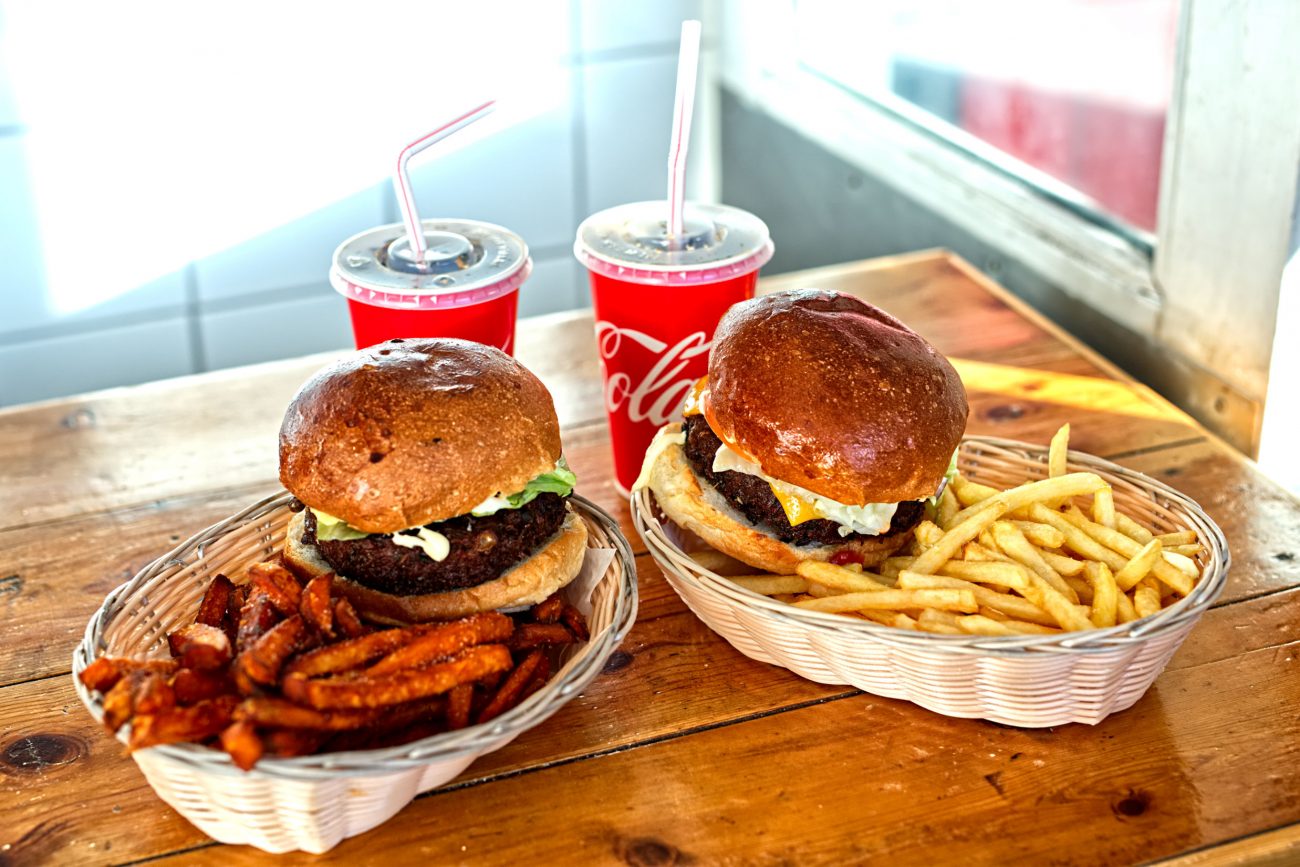 THE TASTIEST VEGGIE BURGERS IN COPENHAGEN

A good burger dosen't necessarily need to be meat-based. Through this guide, we'll visit and recommend the places where the veggie-burger is so tasty, it should be your first choice, rather than an alternative. And we are not talking about healthy veggie burgers. It's the gooey and dripping kind of burgers, that we hope will stay in the city forever.

The Copenhagen burger scene has been on an insane rise in recent years, and the selection of really good burgers is more diverse than ever before. The boring café burger is soon to be forgotten (and we couldn’t be more grateful). In its place, we now see more of the American-inspired and juicy burgers with free-range meat, soft brioche buns, and homemade sauces. Next to the focus on high-quality meat, a different shift has also been presented: A focus on the “green” burger, and on making it as delicious as possible, so it can succeed in avoiding the label of being a less appealing alternative to the meat burger.

It all started in Reykjavík back in 2004, when the burger-enthusiast Tómas Tómasson opened his first burger joint, after having opened the first Icelandic fast-food chain, as well as numerous other restaurants in the Icelandic capital. In 2014, it was time to expand to Copenhagen, and Tommi’s Burger Joint opened in Kødbyen, where the burger joint quickly attained great popularity. 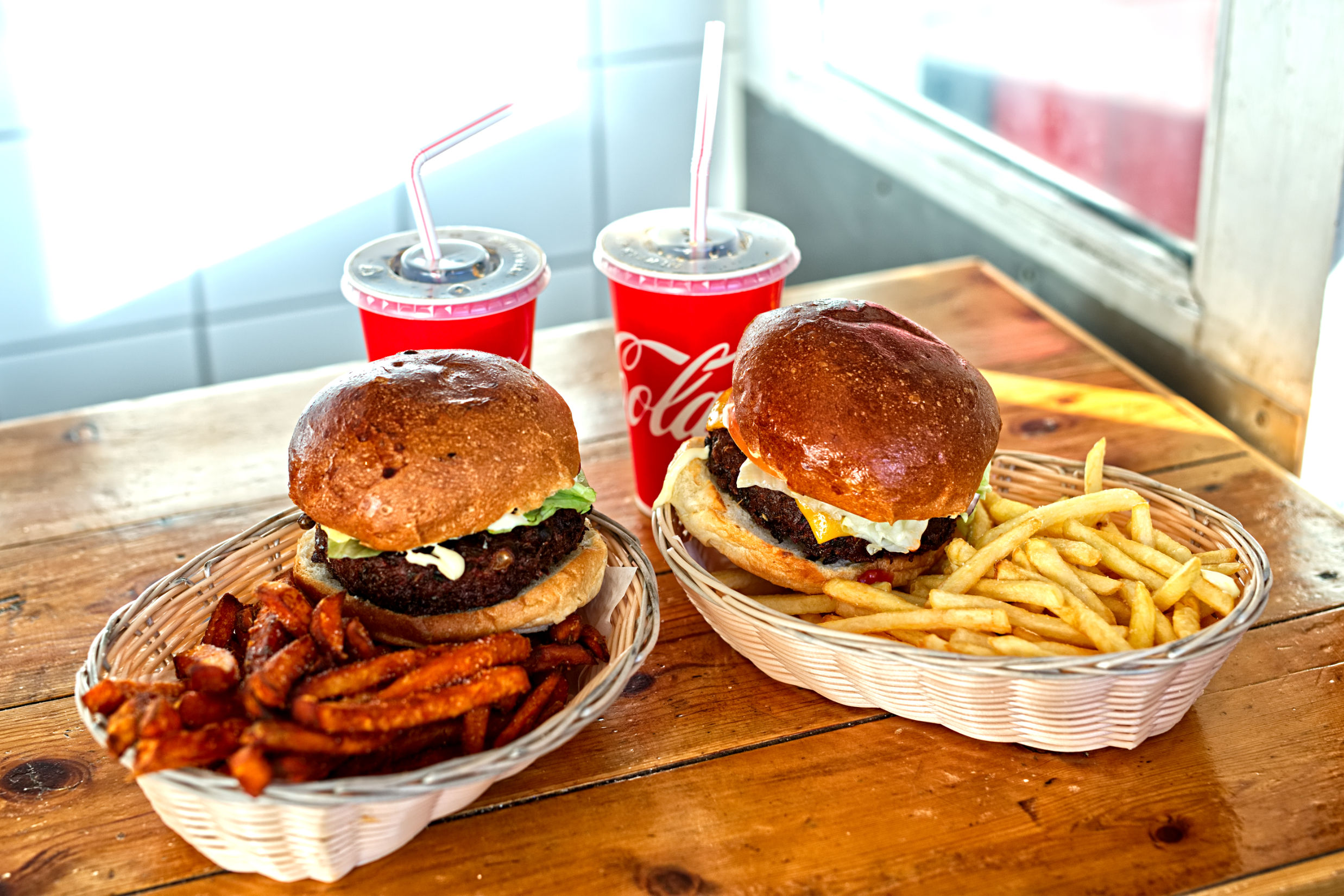 Tommi’s Burger Joint focuses on the quality of meat, which comes from grass-fed cows. But another focus point at the shop is presenting an equally appealing alternative to those who don’t eat meat. Tommi’s veggieburger consists of a patty made from carrot, chickpeas, peas, beetroot, broccoli, onion, beans, and wheat. The burger is vegetarian, but not vegan, as a result of the eggs in the homemade roll. If you prefer the vegan version, just ask, and they will serve the burger in a salad wrap instead of a bun. 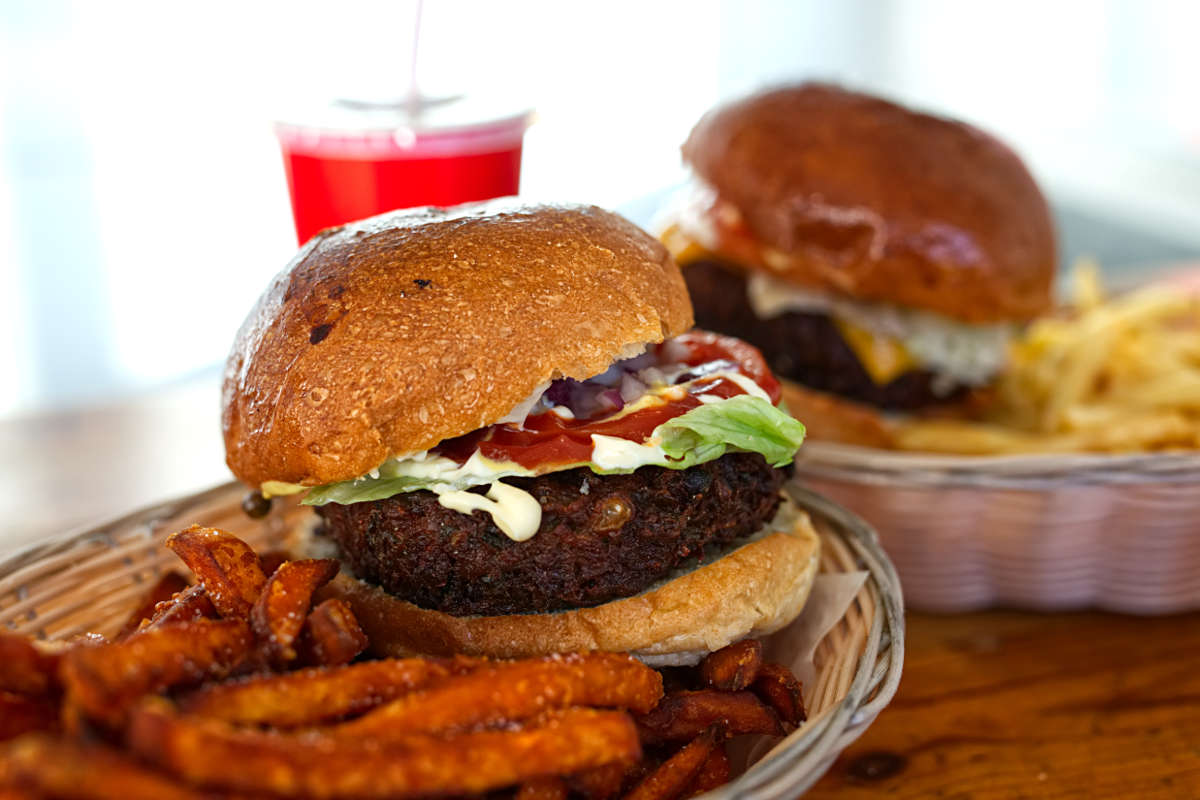 The veggie burger contains a lot of spices, which makes it tremendously tasty, and it contains both mustard, ketchup, and mayonnaise, which makes the burger the perfect level of greasy – just as greasy as a good burger should be.

Tommi’s veggie menu with fries and a soda of your choice will cost you 99 KR. It is also possible to select sweet potato fries as a side, and this is a big recommendation since they actually complement the veggie burger a lot better than the regular fries.

Gasoline Grill can’t escape the conversation when you talk about burgers in Copenhagen. The iconic gas station on Landegreven in København K is still the busiest burger joint in town, which is perfectly understandable, after trying a bite of one of their burgers. Gasoline Grill is mostly known for their cheeseburger, but they do put a lot of work into making their vegetarian burger, named Green Burger, attractive. 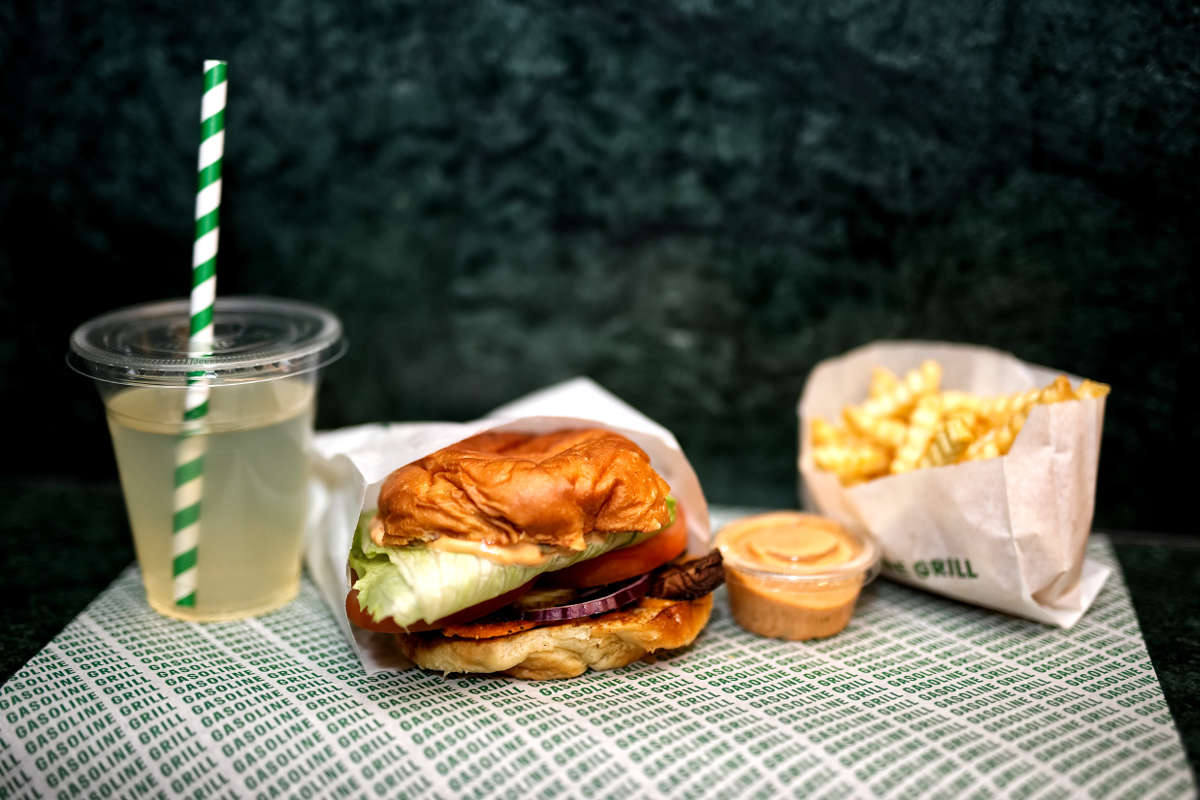 The Green Burger, that we had the privilege to taste, contained grilled portobello mushrooms with Cheddar Cheese, the Gasoline Grill homemade herb oil, Gasoline-sauce and of course tomato, salad, onions, and pickles, all put together by the perhaps softest, and most juicy burger bun that can be found in Copenhagen. The burger buns at Gasoline Grill are the so-called ‘potato rolls’, where the dough has been mixed with a touch of mashed potatoes. This works especially well when it comes to the taste, but the bun also excels in holding together both itself and its contents. On this point, Gasoline separates itself from most of its competitors, where the french brioche bun is usually held in high regard.

The ingredients of the Green Burger at Gasoline Grill vary from season to season. In spring, they put grilled asparagus in the burger. During midsummer, grilled squash takes the lead role instead. All ingredients in Gasoline Grills burgers are organic, and it’s exceedingly rare to find a 100% organic burger, so Gasoline Grill is an easy recommendation if you care about that. 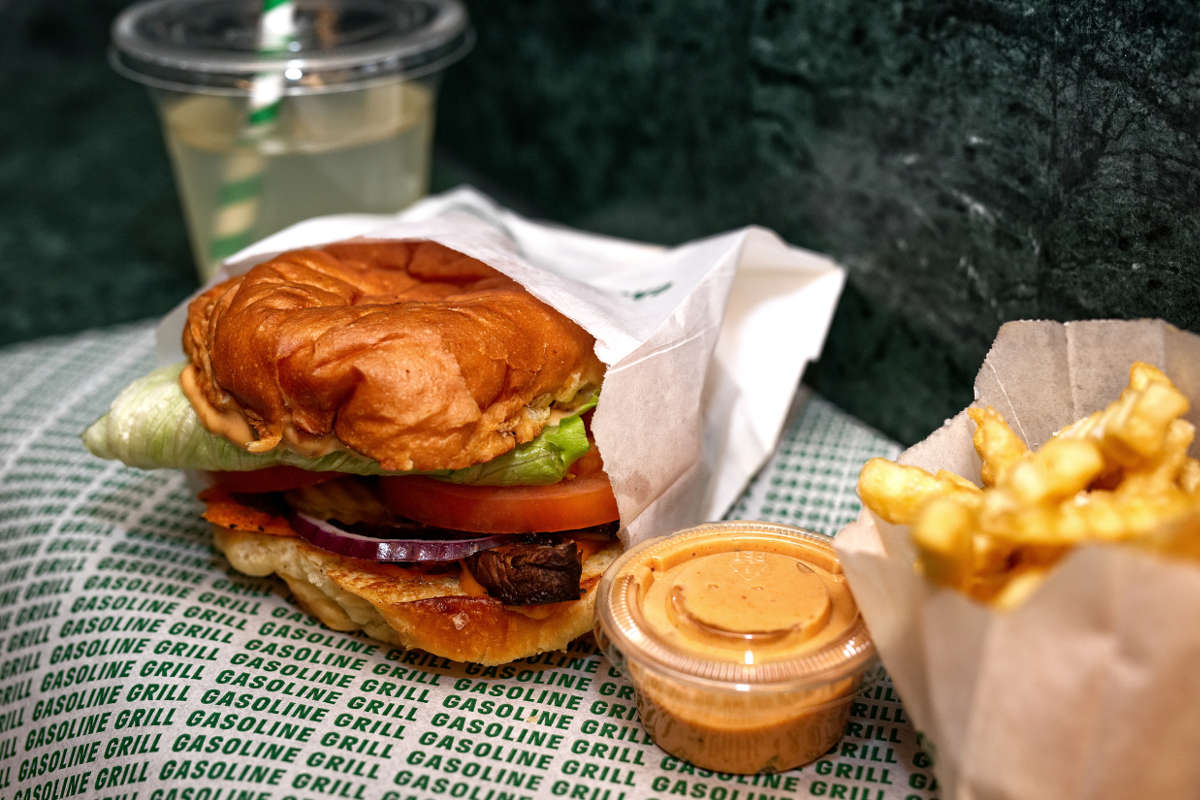 A Green Burger with seasonal veggies will is 75 DKK., and a Gasoline Combo with fries and a soda will cost 110 DKK.

Snack & Blues on Guldbergsgade (Nørrebro) is a tiny restaurant, that interprets and celebrates the American diner culture in a modern and sophisticated way, with diner-like aesthetics that make your thoughts wander to the Drive-in Diners, that you would find on Route 66 in the 1950s.

Snack & Blues sells snacks and plays blues, and that is a concept you can get behind. There are a lot of possibilities at Snack & Blues, but since this is about veggie burgers, we will have to confess our unconditional love to their halloumi burger. 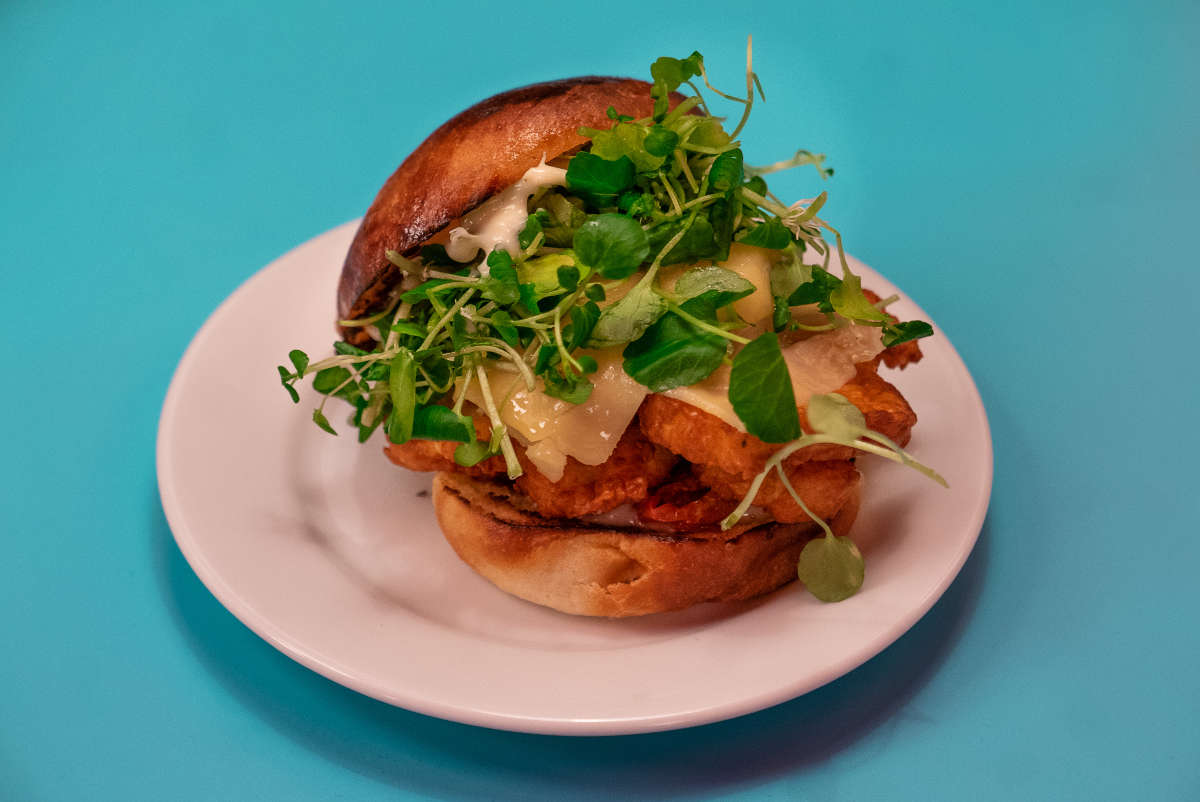 The halloumi burger is very simple: Crispy roasted halloumi made on goat- and sheep’s cheese served in a dark, golden potato roll, which has been greased with a really tasteful aioli, and filled with sweet semi-dried tomatoes and crispy watercress. The icing on the cake is the addition of smoked cheddar, which adds the umami that you can sometimes come to miss in a burger without proteins from meat.

In this halloumi burger, taste and texture melt together in a perfect blend, and then the fries with tarragon are also some of the best, that you can get your hands on. Everything at Snack & Blues is made from scratch, with a focus on good taste, and their shopping is done locally and organically.

This Halloumi burger is in a class of its own, and that says something in a time, where the ambitious burger bars, that are scattered across the city, hold a sea of possibilities when it comes to veggie burgers. An Easy Choice-menu with a starter, burger, fries, dip, and a beer or a soda will cost you 195 DKK. If you just want the halloumi burger, it will cost you 70 DKK.

Jagger has also found itself inspired by the American diners. You can find burgers, hotdogs, fried chicken, milkshakes, sundae ice cream, and lots of other intriguing fast food on their light board menu. Jagger was started by a group of experienced restaurateurs, led by former Michelin-chef Rasmus Oubæk. Their strategy is simply putting high-quality ingredients first. In that way, Jagger can offer a simple and good product for a low price. The many sizes of dishes make it possible to go there, whether you just want a snack, lunch or dinner. Jagger’s primary focus is on high quality in every ingredient, a “no-nonsense”-attitude, and last but not least, achieving a delicious taste. 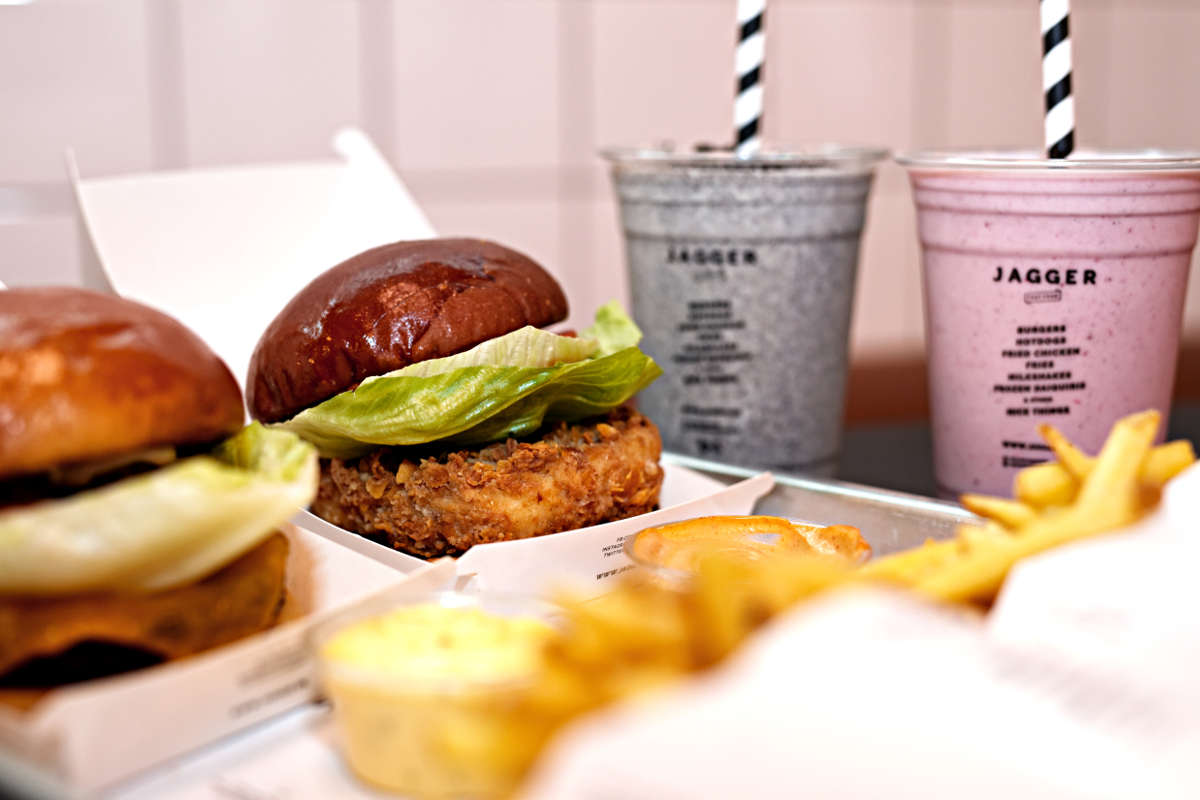 Jagger has found, that more and more ask for alternatives to beef and chicken, and this has led them to introduce another vegetarian burger on their menu, aside from their classical veggie burger with a juicy veggie beef, Irish cheddar, tomato, salad, onion, and pickles, served in Jaggers own brioche bun. The new vegetarian burger, which was introduced on Østerbro, is made with Mediterranean cheese, halloumi cheese. The halloumi is coated, just like their fried chicken, and this somehow gives the sense of biting into the crispiest, juiciest piece of fried chicken one could imagine. Aside from the halloumi, the burger contains tomato, salad, onion, pickles, and Jagger-sauce, and if you want a minor tip: it gets even better if you add a little of the ketchup, which you can use at your leisure from the table. 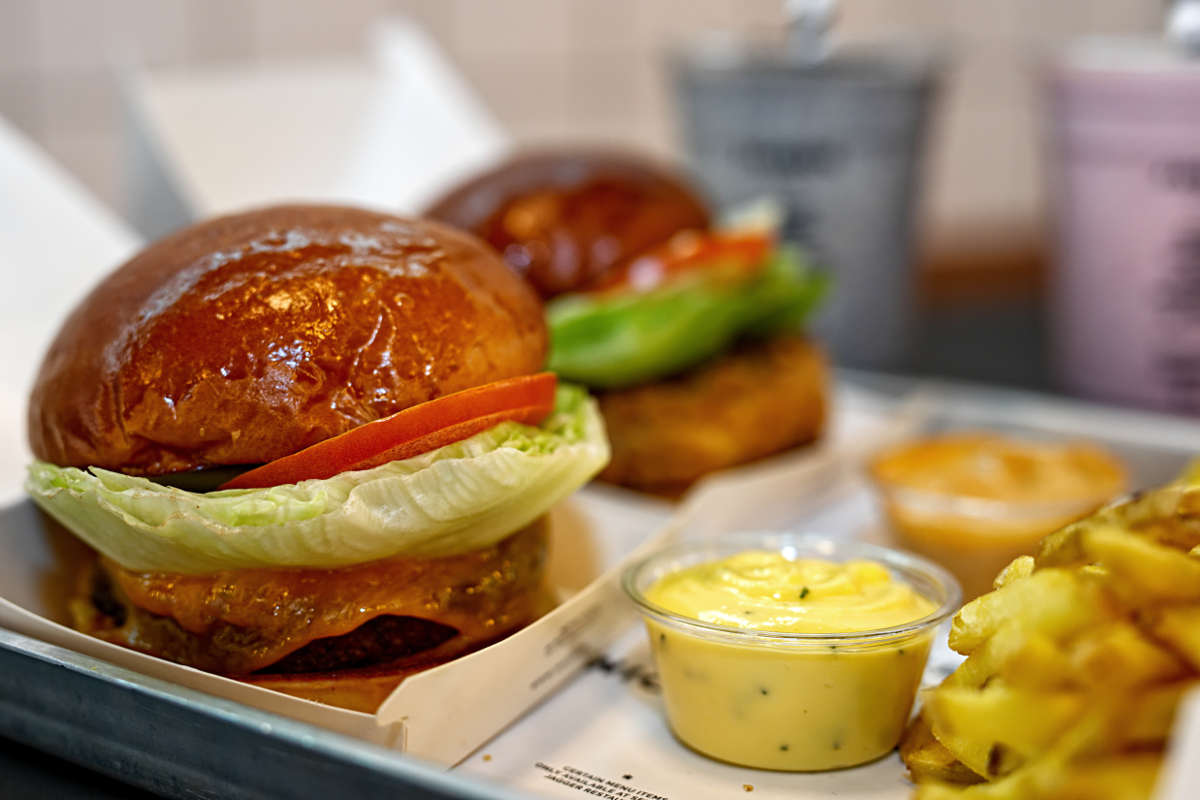 Jagger is also known for its perfect fries, which in many ways are reminiscent of McDonald’s’ fries, except these are on steroids. To be frank: their fries are unbelievably delicious. Make sure you don’t miss more than moderate amounts of Jaggers bearnaise dip for your fries, since Rasmus Oubæk is the uncrowned king of bearnaise in Copenhagen.

A Jagger Veggie Burger Combo with fries and soda of choice costs 110 DKK, and the prices are the same for the halloumi burger. If you just want the burger, it’s 70 DKK.

The simple and unpretentious burgers from Yoburger have won the hearts of many Copenhagen citizens, and this has resulted in no less than 3 burger bars since their opening in 2016. The ambition of Yo’s burgers is to be known as the place that serves high-quality fast food, rather than gourmet burgers. The burger buns are classic brioche buns, the beef comes from Grambogård, a butcher on Fyn, and the contents of a Yoburger are the typical ingredients, like tomato, salad, cheese, and their own so-called magic sauce. It is possible to upgrade your burger with avocado, bacon, or an extra patty.

YOPortobelle is the name of their veggieburger, in this burger, the patty is a portobello mushroom, that has been filled with cheese, and breaded twice in panko. Yo Burger is the only ones in this guide who makes their patty this way, and it’s a really good alternative to meat. Aside from the crispy mushroom, the burger also contains a lot of rustic and fresh green salad, and a couple of slices of juicy tomato. Yo Burger generally keeps their veggie burger very simple, so there’s neither onion nor pickles in the burger. There is a clear focus on getting the maximal output from the minimal ingredients, and though you would think, that the burger would lack the acidic touch from the pickles or the sharpness from the onion, it doesn’t actually need it. The burger just tastes really well, and it is unlike any other burger, we’ve had before.

Yo Burger offers to seat, but at most of their locations, the concept is mainly designed to let you grab a quick burger on the go.