The local microbrewery on Ravnsborggade in Nørrebro opens a sister brewery out on Refshaleøen tomorrow. Here, you can get a very special Reffen Lager and also get the story of the beer's journey by the brewmaster himself.

KLIK HER FOR AT LÆSE ARTIKLEN PÅ DANSK

Tomorrow, 12 August, Nørrebro Bryghus does not only celebrate the opening of their new brewery at Reffen with fanfares, music and free tastings. They also name their first ship and brew their first brew, while the brewmaster takes you on a journey in the beer universe, telling you about the beer’s journey from cornfield to draft beer cup.

The container brewery at Reffen is the latest addition to Nørrebro Bryghus, which makes it possible to enjoy an organic beer at Denmark’s largest food market, brewed locally on site.

One of the first microbreweries in Denmark

Nørrebro Bryghus opened its doors in 2003 and thus became one of the first microbreweries in Denmark. Since then, they have brewed more than 250 different beers, each with its own taste and personality. They have brewed everything from sweet, sour, bitter, mild, dry and hopped beers. And the courage to dare to experiment with different types of beer means that they have played an essential role in the development of the Danish microbrewery scene.

Common to all of Nørrebro Bryghus beers is that they are 100% organic and typically brewed with inspiration from both the Belgian, German, English and American brewing culture. Another characteristic of the beer is that they go well with food. This also applies to the beer Reffen Lager, which is brewed in the new container brewery at Reffen.

The opening of Nørrebro Bryghus’ container brewery will be celebrated tomorrow, Wednesday 12 August from 17-20. There is free entry and free tastings, while the Nørrebro Bryghus beer orchestra plays live music. 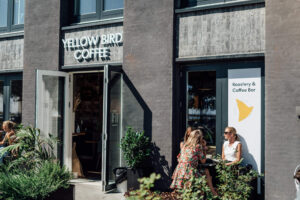